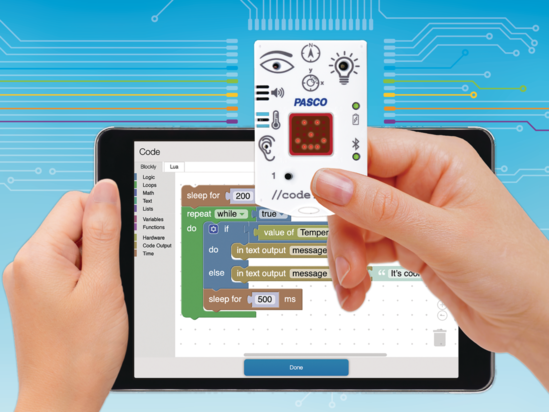 Last week, PASCO Scientific announced the debut of the //code.Node, a first-of-its-kind product that will allow students to collect real-time data using code.

Students around the world are captivated by coding activities. Whether they’re encoding a robot, light, or system, they are excited and engaged. The //code.Node brings that coding excitement to data collection using wireless sensors and visual feedback to teach coding skills that produce analysis-ready data, said Richard Briscoe, President and CEO of PASCO Scientific.

The //code.Node is a revolutionary device that uses Blockly, sensors, and feedback to teach students coding skills and data literacy. The pocket-size coding solution includes encodable sensors for light, motion, sound, and magnetic fields, as well as a speaker, RGB light, and a 5×5 LED array. Using PASCO software and the //code.Node, students can create custom experiments that range from simple data collection to advanced, measurement-based sensory feedback. As they execute their code, students collect real-time data and visual feedback that helps them improve with each activity.

Coding activities are a highly effective tool for student engagement, but they rarely satisfy both ISTE and local standards. The //code.Node is the first educational solution to demonstrate how coding relates to data collection and analysis. It’s no longer about simply learning to code; it’s about coding to learn, said Briscoe. The //code.Node is a preview of PASCO’s 2020 focus, Code to Learn. Learn to Code. The company recently integrated Blockly into both SPARKvue and Capstone to provide learners with an expansive yet intuitive coding platform. Students can develop their coding skills by encoding any of PASCO’s wireless sensors, testing code in real time, and analyzing their collected data.

PASCO Scientific will release a series of //code.Node labs to assist school learners in developing future preparedness for code-derived data collection. The //code.Node will make its public debut later this month at Bett Show 2020 in London, and will begin shipping in April 2020.

Category: Uncategorized
Edulab
We use cookies on our website to give you the most relevant experience by remembering your preferences and repeat visits. By clicking “Accept All”, you consent to the use of ALL the cookies. However, you may visit "Cookie Settings" to provide a controlled consent.
Cookie SettingsAccept All
Manage consent