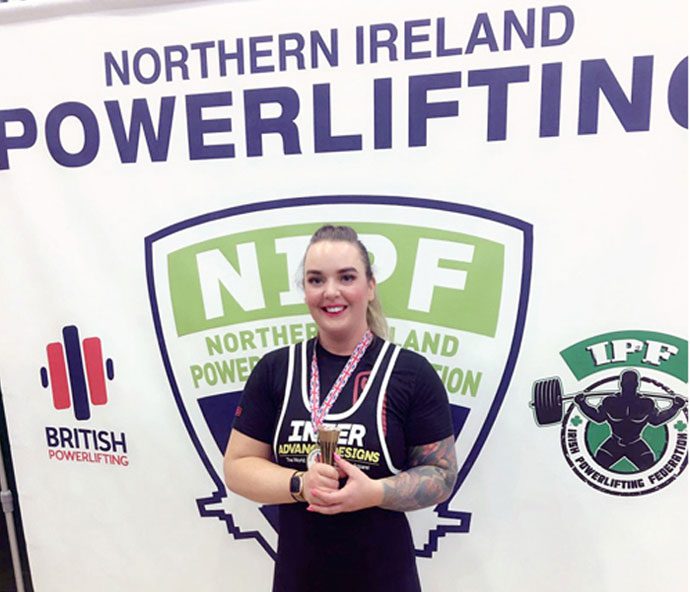 “I’ve learned some great life lessons. If I set my mind to something, I can accomplish anything.”

Back in February of 2018 our Scotland Account Coordinator, Lynsey Christie, competed in the Eastern District Division of powerlifting and won! She then decided she would try the next step and go after the Scottish Championship. She was delighted when on Sunday 12th of August 2018 she became Scotland’s Masters Champion in the 84+ M1 category taking not only the gold, but three new Scottish records in Back Squat, Deadlift and 400Kg final total lifted!

With three chances to lift in each discipline, she finished with 152.5Kg Back Squat, 75Kg Bench Press, and 172.5Kg Deadlift. Plus, with eight other strong women in Lynsey’s category, it was not an easy competition, but with the sport is becoming more and more popular amongst women and continuing to grow each year, it’s not surprising.

“I have always liked to take up hobbies that are not quite the norm, just to challenge myself and powerlifting was one of these challenges. How heavy you can lift is a personal challenge and it requires lots of training and plugging away each night in the gym, working on your technique and binging up those numbers week-by-week, kilo by kilo. It gives you a sense of achievement that your hard work has paid off when you stand on that platform and pull out your personal bests.” Lynsey explained.

Her achievement in winning the championships is made more special by the story behind it. Her previous sport was mixed martial arts and boxing and she was becoming quite an accomplished dressage horse rider. But seven years ago that was all brought to a stop when she got diagnosed with stage three breast cancer, and it was soon discovered to have spread up through her right arm. It led to operations that, unfortunately, to remove the tumours, they had to cut nerves and tendons in her arm, leaving her with the uncertainty if she ever would have use of it again, let alone compete in anything!

Following recovery from rigorous treatment of chemo and radiotherapy, and never to be defeated by a challenge, she took up the mission of her own rehab to get use of her arm back again. Her first challenge was getting her fingers moving; once she got these in motion there was no stopping her!

It was straight off to the pool using water resistance to move her hand and wrist, once that was done, she went onto weights, working on holding weights, then seeing how long she could hold them for and then increasing the weight of them. The deep concentration she had to endure trying to flex her fingers, wiggle her thumb and move her wrist was all instrumental in helping her towards the goal of weightlifting.

The rigors of cancer treatment meant her body could no longer do the same sports as she used to, things were harder, recovery was slower and everything hurt. The other downside to the regime of chemo is that it attacks joints and bones, weakening them. The skeleton on its own is weak, but building muscle around your frame like scaffolding and then putting this under tension, means that things that weren’t stable before became solid and bones strengthen.

This opened the gateway to Powerlifting. The more she learned in the gym, the more she found herself being drawn down the path to see what she could do and learning that when she has a goal, like a competition, it gives her more focus to push herself forward. What set out as a mission to move her fingers became an adventure where she’s met some great people, had some fantastic experiences, and made personal achievements.

“I’ve learned some great life lessons. If I set my mind to something, I can accomplish anything.” Lynsey told us, “It doesn’t matter what anyone else does, the only person you are in competition with is yourself.”

And she has proven that she can do anything – as a cancer survivor, with a right arm that can pull a 172.5Kg deadlift, as a Scottish Champion and as a record holder!

Edulab
We use cookies on our website to give you the most relevant experience by remembering your preferences and repeat visits. By clicking “Accept All”, you consent to the use of ALL the cookies. However, you may visit "Cookie Settings" to provide a controlled consent.
Cookie SettingsAccept All
Manage consent