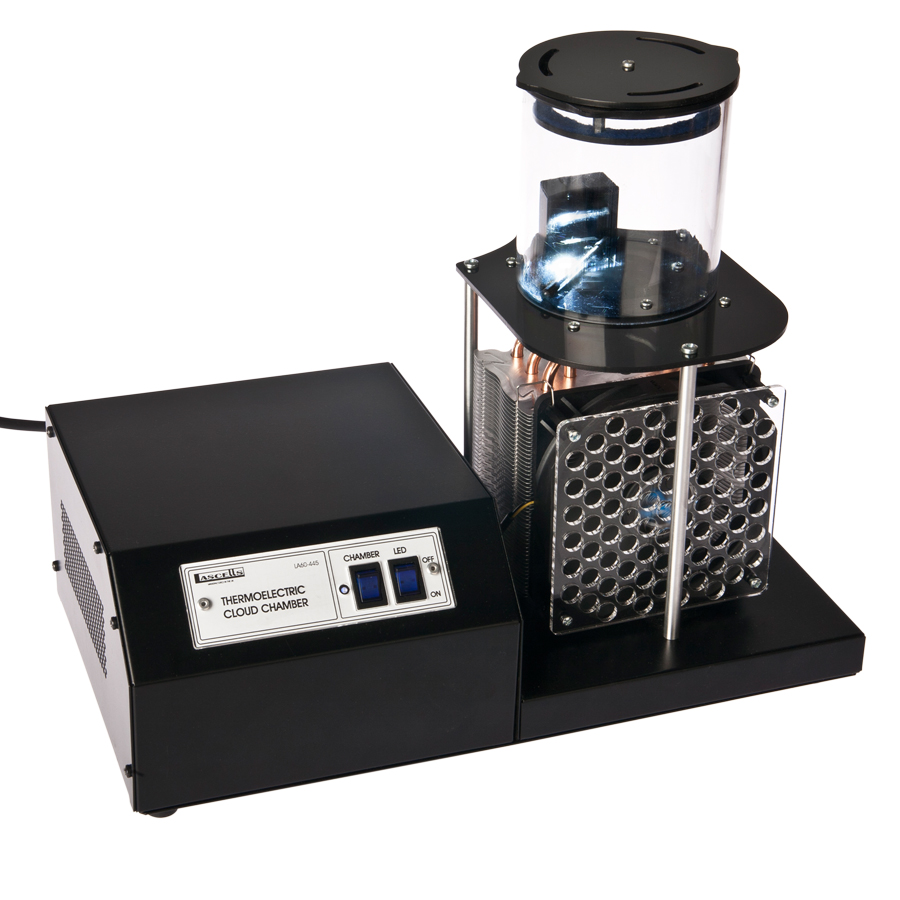 Radiation is all around us, and completely invisible to the naked eye. It wasn’t until 1896 that anyone knew this radiation even existed. It was first discovered by Henri Becquerel when he realised that photographic paper was blackened by rocks containing uranium. Today, we know that thousands of substances are radioactive, giving off particles which travel in the air until they become absorbed by another material or the air itself.

Detecting this radiation can be done using a piece of equipment called a cloud chamber. A cloud chamber can reveal any background radiation in the atmosphere, and despite sounding complex, they are quite simple pieces of kit to understand. At SciChem, we stock Lascells cloud chambers, which are popular in all kinds of laboratories and education settings.

Lascells are dedicated to manufacturing products which make teaching science easy and enjoyable. Their expert team have been creating lab equipment since 1997, and their cloud chamber is a bestseller from their product range. In this guide, our specialists are delving into what a cloud chamber is, what they detect, and how they work to reveal radiation.

What Is a Cloud Chamber?

A cloud chamber is a piece of equipment which has an enclosure filled with supersaturated water or alcohol vapour. It was first invented in 1912 by Charles Wilson, and this piece of kit is sometimes called a Wilson cloud chamber. He first invented the cloud chamber as a way of creating small clouds and then observing the optical phenomena around them, which is where the name cloud chamber comes from. Over a few years, he began to realise that the chamber he had created could also detect the movement of subatomic particles. 20 years after his initial invention, Wilson had perfected the design and created the world’s first particle detector.

The original cloud chamber invented by Wilson had three separate sub-chambers: the sensitive chamber, the control chamber, and the vacuum chamber. In addition to these, there was also various valves and a water-sealed piston. The sensitive chamber is the area where subatomic particles can be seen, and it’s a sealed enclosure with saturated air inside. Saturated air has 100% humidity, which means it is holding the maximum amount of vapour possible at the current pressure and temperature.

What Do Cloud Chambers Detect?

Cloud chambers are often used in laboratories and science experiments in order to detect ionising particles. The particles that can be studied with a cloud chamber include electrical charged particles, and the devices can also reveal the amount of ionisation, the properties, and the identity of the particle. They are commonly used for the study of radioactive elements, including alpha, beta, and gamma radiation. Alpha is more ionising compared with beta, and gamma rays are electrically neutral so do not ionise, which means they cannot be detected in a cloud chamber.

How Do Cloud Chambers Work?

Cloud chambers are used to detect subatomic particles, but they do not work by displaying the particles themselves. Instead, this equipment reveals the tracks left behind by particles in the form of a thin mist. The tracks are a result of condensation of the vapour in the enclosure and differ slightly between various types of particles. This is how cloud chambers work to identify particles and their differing properties.

A cloud chamber works using the expansion of saturated air and the downward displacement of a piston. The air works on the piston at the expense of its own internal energy, following the first law of thermodynamics. This causes a decrease in the air’s temperature thanks to the decrease in internal energy, and the result is that the air is in a super-saturated state. The air is just about to condense, but an extra impetus is required to make this happen.

Charged particles crossing through the air provides this extra impetus and causes the air molecules to ionise and knocks the electrons off their orbit. These ionised molecules are attracted together, causing drops of water to condense into a misty trail. The trail only lasts a few seconds but can be used to detect characteristics of various particles. Some cloud chambers use alcohol vapour as opposed to water, because of the low freezing point.

Category: Uncategorized
We use cookies on our website to give you the most relevant experience by remembering your preferences and repeat visits. By clicking “Accept All”, you consent to the use of ALL the cookies. However, you may visit "Cookie Settings" to provide a controlled consent.
Cookie SettingsAccept All
Manage consent